We share our home with our fur-babies so it makes sense to want to share the food that we’re enjoying as well. Sadly, because humans and dogs metabolize food differently, many of the foods we consume are actually bad for our pets. And by “bad”, we don’t just mean the kind of bad that makes them gain weight over the course of a few months, rather the kind of bad that sends them to the emergency vet. Worry not, we’ve compiled a list of common foods that you shouldn’t feed your pets. So be strong, resist those puppy dog eyes, and read on. 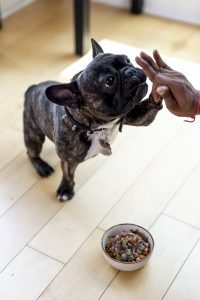 1. Onions, garlic, and chives cause gastrointestinal irritation and contain compounds that can destroy a dog’s red blood cells that then leads to haemolytic anemia. The symptoms of anemia include pale gums, weakness, elevated heart rate, and collapse and may take days to show. So if you suspect that your dog may have eaten some, monitor them for a few days.

2. Chocolates and cocoa powder contain theobromine and caffeine which are stimulants that can make your pup extremely ill and, in severe cases, even lead to death.

3. Grapes and raisins cause rapid kidney failure, leading to death in dogs.

4. Nuts: almonds, macadamia, pecan, walnut. Macadamia nuts are part of the Protaceae family and can cause vomiting, hyperthermia, lethargy, muscle weakness, and damage to the nervous system, even in small amounts. Meanwhile, almonds are difficult for dogs to digest and may cause vomiting and diarrhea. Nuts also contain high amounts of oils and fat which may cause pancreatitis.

5. Fat trimmings or fatty food in general (like bacon), can lead to pancreatitis in dogs.

6. Xylitol is an artificial sweetener found in gums and candies. It causes insulin to spike, which then leads to liver failure, seizures, and even brain damage to your dog.

7. Coffee and tea are potentially dangerous for dogs because of their caffeine content. Even small amounts of caffeine can cause severe effects such as seizures, lung failure, and arrhythmia which can lead to death. According to the ASPCA, “when ingested by pets, methylxanthines can cause vomiting and diarrhea, panting, excessive thirst and urination, hyperactivity, abnormal heart rhythm, tremors, seizures and even death.”

8. Salty snacks / junk food – Chips, French fries, and other snacks that are heavy in salt can cause excessive thirst and urination in dogs.

9. Alcohol – Of course, no dog parent in their right mind would give their dog alcohol. But just in case, here’s a warning from the ASPCA: “Under no circumstances should your pet be given any alcohol. Alcohol has the same effect on your dog’s liver and brain as it does on a human’s — but it only takes a little to do a lot of damage.”

10. Cinnamon present in pastries can cause diarrhea, vomiting, increased/decreased heart rate, and even liver disease. So yeah, maybe think twice before you split that cinnabon with your dog.

11. Avocados contain persin, a compound that causes diarrhea, vomiting, and heart congestion in dogs. Persin is also present in the leaves and bark, so if you have an avocado plant at home, make sure to keep it away from your dog.

13. Raw yeast dough – When eaten by dogs, raw yeast dough expands inside their stomach and may cause bloating, discomfort, and in severe cases, rupture their intestine.

14. Medicine for humans – Human medications that are toxic to dogs include NSAIDs, Acetaminophen, Antidepressants, Benzodiazepine and other sleep aids, and birth control pills. While these are not technically food, accidentally ingesting common medications may cause serious health problems for your pets.

15. Apple seeds – Similar to the peach and plum pits, apple seeds contain a compound that releases small amounts of cyanide when digested.

If you suspect that your pet has eaten any of these foods, please note the food/substance and amount ingested and contact your veterinarian.

We use cookies to personalise content and ads, to provide social media features and to analyse our traffic. We also share information about your use of our site with our social media, advertising and analytics partners who may combine it with other information that you’ve provided to them or that they’ve collected from your use of their services.
More info Accept